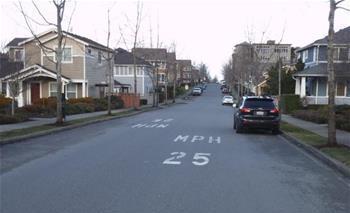 The City has partnered with the Highlands Council to promote traffic safety for Highlands residents and travelers, focusing on education first.

In July 2017, Highlands residents met with City staff to discuss speed concerns throughout the neighborhood. This meeting resulted in a shared goal to promote a safe and pleasant neighborhood.

The City made plans to focus on an educational approach to traffic calming. Starting in fall 2017, the City and the Highlands neighborhood teamed up to influence the behavior of those using the roads in the Highlands. The City installed signage and pavement painting to remind drivers to drive slowly. The Highlands used social media, web and newsletter articles to push a "Drive with Care, Walk Aware" campaign.

In January 2018, City staff held another meeting with Highlands residents to follow up on speed concerns and report progress. The conversation expanded from reducing speeds to improving traffic safety.

Concerns identified at both meetings included:

The City has compiled the comments received regarding transportation in the Highlands and created a plan to address them. This spring, the City will take the following steps to address identified pedestrian, parking, speed and traffic calming needs:

Future steps include obtaining updated speed data and determining whether there is a need for pilot traffic calming devices.

Help us continue the conversation! Learn more about what the City has heard from residents, what we have done and what we plan to do in the future, and leave feedback.