Welcome to the Economic Development Quarterly Dashboard which tracks business trends and economic health of Issaquah. These metrics provide a glimpse into commercial property, retail sales and unemployment trends.

This Dashboard was created in October 2020 and will continue to be improved to provide a broader picture of Issaquah's business climate. For additional measures at the state and county level, please visit the newly released WA State Department of Commerce Economic Recovery Dashboard.

Questions and suggestions can be directed to economicdevelopment@issaquahwa.gov. 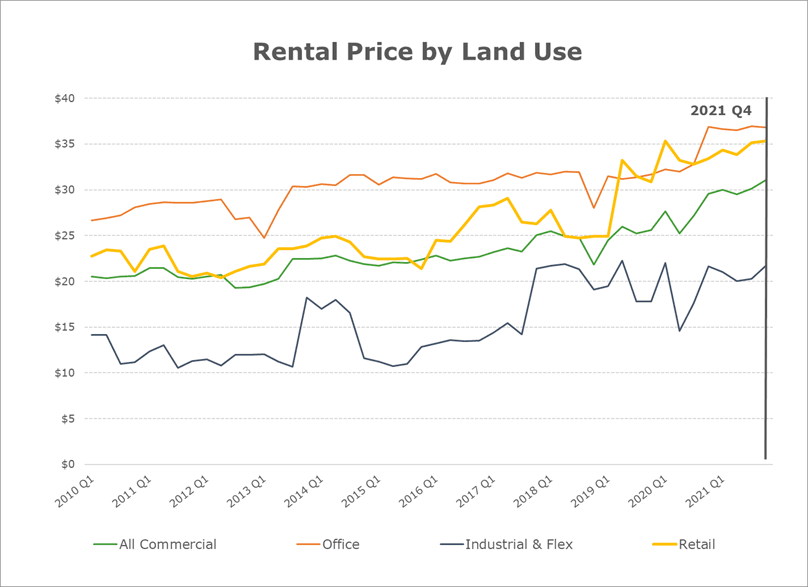 This data is from the CoStar Property Database, which is one of several possible sources for information on commercial real estate. Different sources with different methodologies will reflect different local and regional estimates. The data in this chart is from one data source, and so does not reflect differences in methodology, but in the real-world trend that CoStar’s research uncovers. 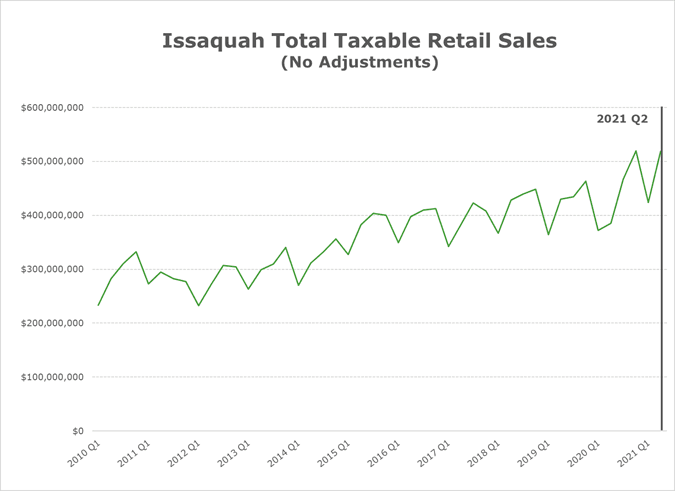 This data reports the volume of retail sales that are subject to sales tax in the City of Issaquah. It is important to note that this data does not describe the revenue generated from taxable retail sales, but the gross amount that is sold. The period 2010-2021 reflects the entire recovery from the 2008-9 Great Recession.

Overall, one can see a steady upward trend in unadjusted taxable retail sales over this time period. The pandemic clearly stunted the normal second quarter resurgence in taxable retail sales in 2020, but the retail sales market has now surpassed even its pre-pandemic growth trend. This is at least partially the result of pent-up demand from the COVID-19 pandemic, as well as the massive federal stimulus efforts that directly increased household income in 2020 and 2021. Individual sectors might still be facing deep negative ramifications from the pandemic, but this would be reflected in a change in the distribution of taxable retail sales as opposed to a dip in the total amount of sales.

This data diverges from the revenue that the City actually receives mainly because taxable retail sales are reported here by quarter, whereas revenue is disbursed to the city on a monthly, as opposed to quarterly, basis at least two months after the sale. There are no adjustments to this data, so it reflects seasonal differences between quarters and is not adjusted for inflation.

From the federal Bureau of Labor Statistics, this chart reports the unemployment rate for Issaquah residents. Included for reference are the unemployment rates for Washington State and the Seattle Metropolitan area as a whole. This period reflects the entire recovery from the 2008-9 Great Recession, as well as the first quarter of the COVID-19 pandemic. Overall, one can see two stark facts.

First, this chart makes clear that Issaquah’s local unemployment rate has remained clearly below the statewide and regional average. This is true even in the midst of the current pandemic. While this chart does not include it, the preliminary data for November 2021 has the unemployment rate in Issaquah reaching a level lower than at any point since before the pandemic.

Second, the COVID-19 pandemic (as reflected in the sharp spike at the right end of the graph) has had a drastic effect on the labor market. This massive surge in unemployment has been seen across the country, and reflects both direct changes (e.g. layoffs during forced closures), as well as federal policy, as the federal government used unemployment benefits as a key stimulus measure. Many of those who lost their jobs in the first and second quarter have returned to employment by the end of 2021. The unemployment rate hadn’t yet returned to its pre-pandemic trend levels by the third quarter of 2021, although, as mentioned above, the preliminary data for the fourth quarter of 2021 has the unemployment rate for Issaquah returning to a level lower than at any point since January 2020.

This data is not seasonally adjusted, since the data for Issaquah is not available on a seasonally-adjusted basis. This means that natural seasonal differences are not reflected, although those differences seem clearly muted in Issaquah’s case compared to the broader region and state. This data is directly equivalent to the broadly reported U3 unemployment rate, which is the standard for comparison. Individuals who have left the labor force (e.g. through early retirement) or who are “underemployed” (i.e. working fewer hours than desired) are not counted in this rate. 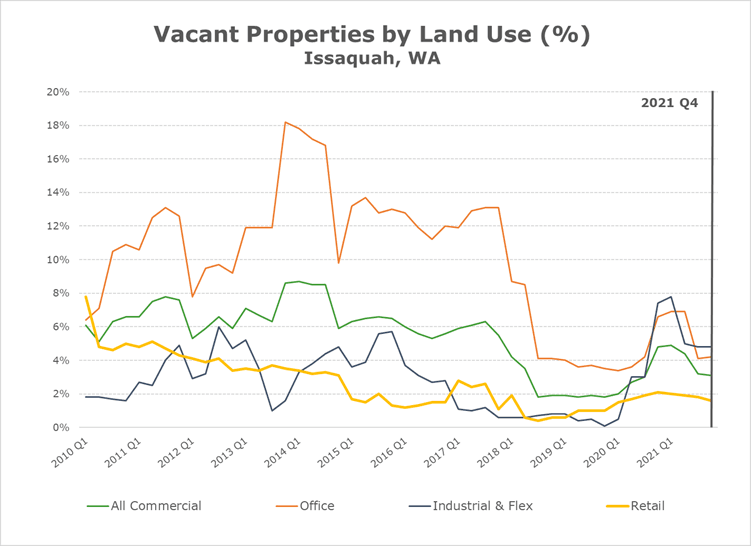 This data reflects the percent of properties that were vacant in each quarter from 2010 to present. Starting in 2010, this period reflects the entire recovery from the 2008-9 Great Recession. The final two quarters of data reflect the first effects of the COVID-19 pandemic. One can see a steady trend in vacancy rates that has been only barely disturbed by the COVID-19 pandemic. Whether the COVID-19 pandemic has longer lasting effects in vacancy trends remains to be seen. Over the entire period, most sectors have seen a fall in in vacancy rates, with industrial properties after 2018 being the only exception. There was a significant reversal of this trend for all but retail properties in 2020, although vacancy rate have begun to decline back to trend levels as the recovery started in 2021.

This data is from the CoStar Property Database, which is one of several possible sources for information on commercial real estate. Different sources with different methodologies will reflect different local and regional estimates. The data in this chart is from one data source, and so does not reflect differences in methodology, but in the real-world trend that CoStar’s research uncovers.